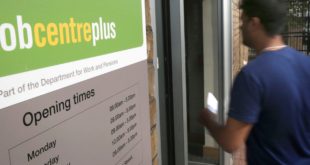 150,000 jobs lost or threatened: Which UK employers are facing the biggest cuts? 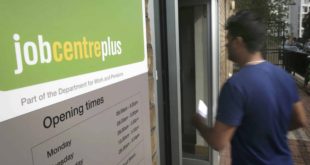 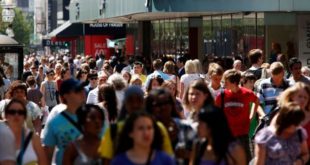 A series of Christmas cards sent by the Royal Family over 25 years to a married couple on their staff are going under the hammer.

The cards will be up for auction on December 7, with most of them sent by the Queen and Prince Philip, and they show the changing face of the monarchy from the black-and-white post war world to the colourful 1970s.

They were sent to the married couple who worked at Balmoral, the wife working in the house and the husband on the estate.

The first from 1947 is signed by King George VI and the Queen Mother and includes a photo of them at a piano with Princesses Elizabeth and Margaret playing. Although George died in February 1952, the Queen had taken over many of her father’s Royal duties months before and the 1951 card is the first to be signed by her and Philip.

Roddy Lloyd, from Rowleys, said: ‘These were consigned by the daughter of a couple who both worked at Balmoral.

‘She worked in service at the house and the husband was an estate worker. The Royal family must have regarded the couple in high esteem and each is signed in ink – ‘Elizabeth R’ and ‘Philip’ – part from the earliest which is signed by King George.

‘This really is a wonderful piece of history, showing as it does the growth of the Royal family – you can see the children grow up through these photographs. It also shows them smiling and enjoying themselves just like any other family. They will appeal to collectors of royal memorabilia.’

1947: King George and the Queen Mother with Princesses Elizabeth and Margaret. This is the first Christmas card in the collection. Princess Elizabeth, later the Queen, married Philip in November 1947, who became the Duke of Edinburgh. The Christmas cards were sent to a married couple who worked at Balmoral, the wife in the house and the husband on the estate 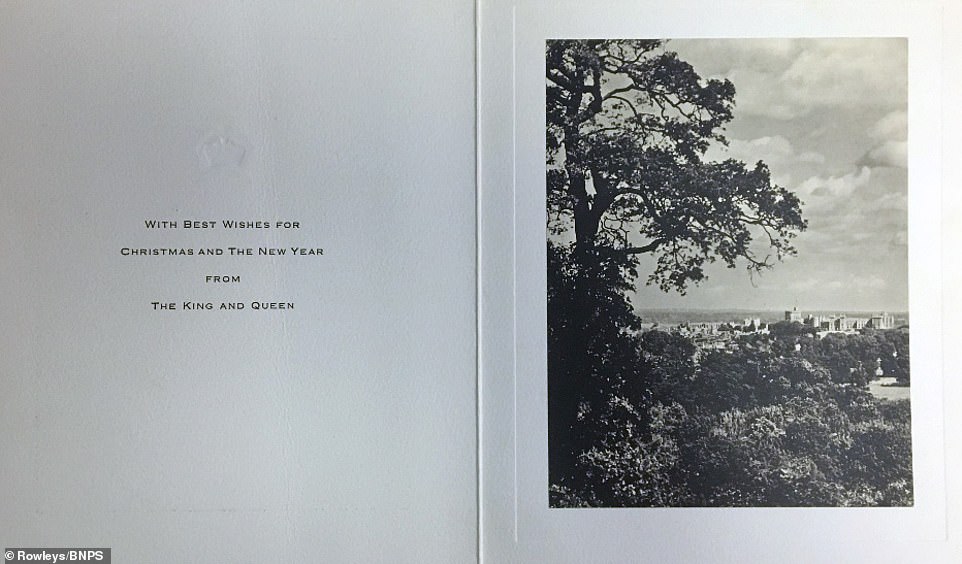 1950: A distant view of Windsor Castle. Elizabeth, then still a Princess, has her second child with Philip. Princess Anne, the couple’s only daughter, was born on August 15. The photos are being sold at Rowley’s auction house in Ely, Cambridgeshire, with estimates of between £100 and £150 per card 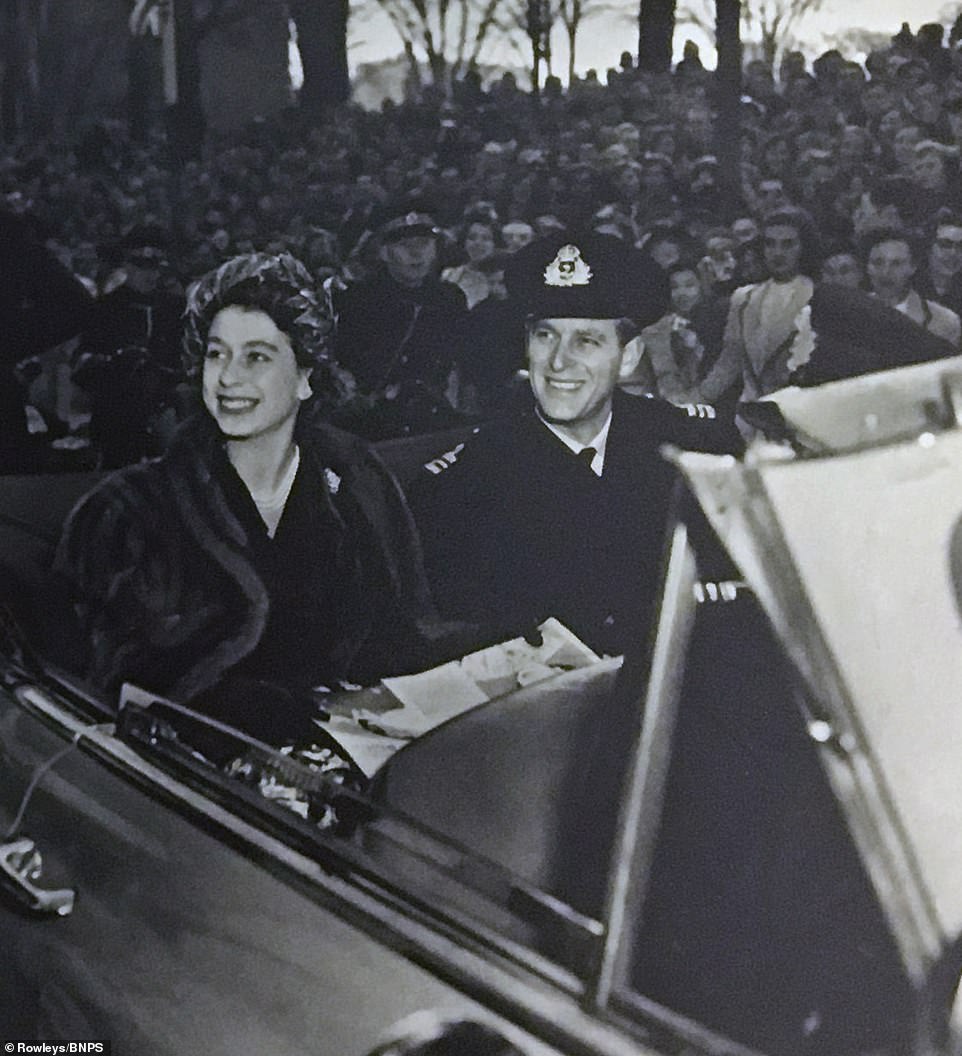 1951: Although King George died in February 1952, the Queen had taken over many of her father’s Royal duties months before and the 1951 card is the first to be signed by her and Philip. The Duke of Edinburgh and Princess Elizabeth went on a tour of Canada in the autumn of 1951. Their Christmas card used this photo of adoring crowds cheering on the royal couple 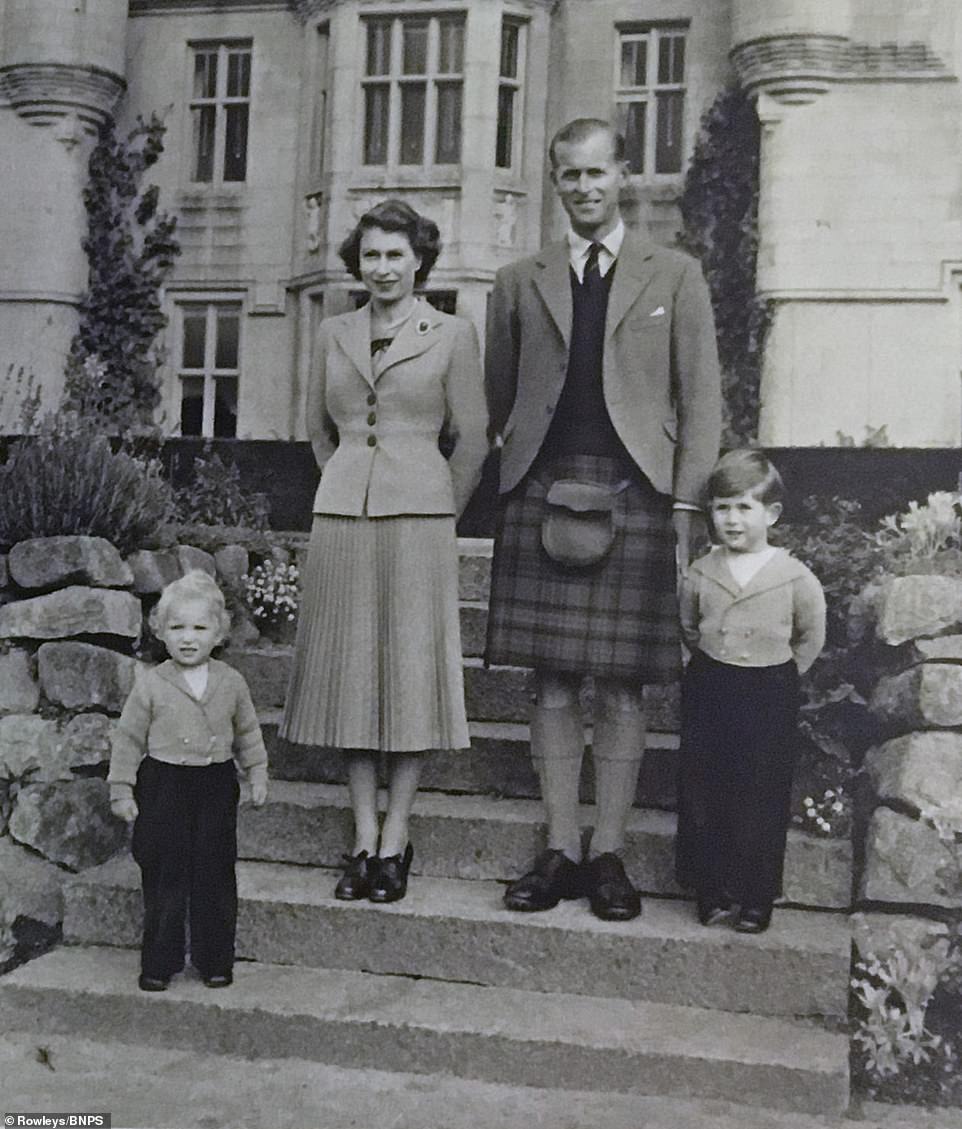 1952: This Christmas card saw the first appearance of Charles and Anne. 1952 was a tumultuous year for the royal family. In February, Princess Elizabeth and her husband Prince Philip, set out on a tour of Africa and Asia in place of her ailing father King George VI. George died on February 6 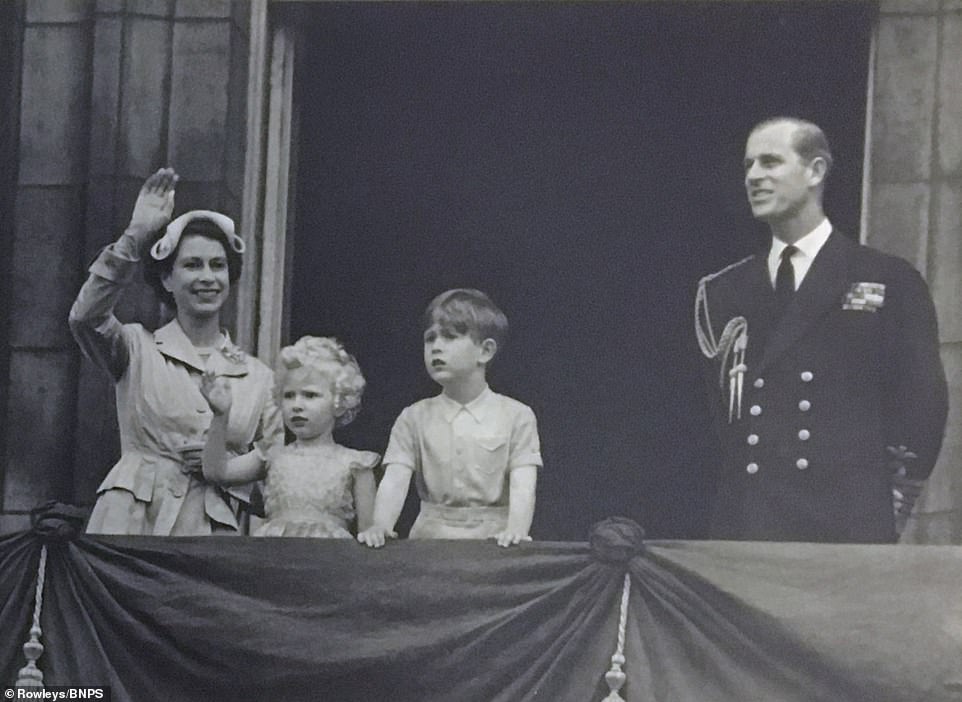 1954: This picture shows Queen Elizabeth and Prince Philip with Charles and Anne on the balcony of Buckingham Palace. The year before, Queen Elizabeth was crowned at Westminster Abbey in the first televised coronation service 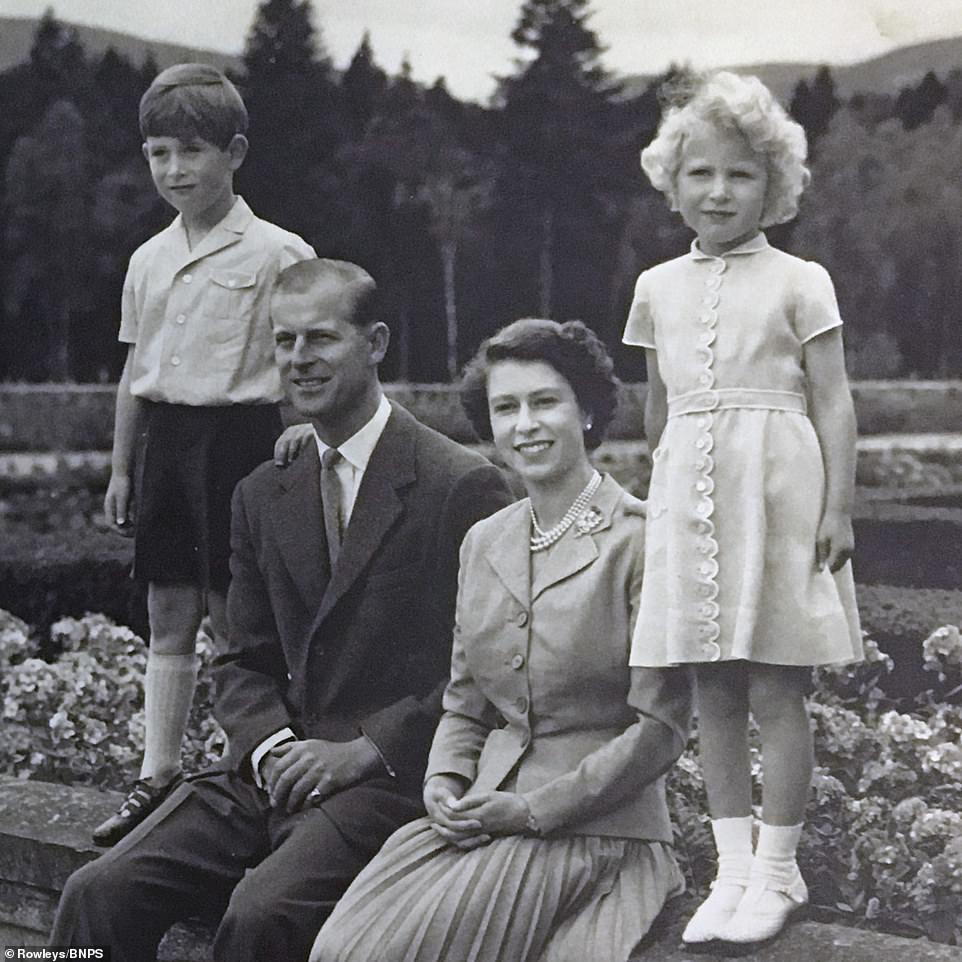 1955: Back to Balmoral with Charles and Anne. This photo is believed to have been taken in the summer and shows the royal family enjoying their summer vacation at Balmoral. Talking about the collection, Roddy Lloyd, from Rowleys, said: ‘These were consigned by the daughter of a couple who both worked at Balmoral’ 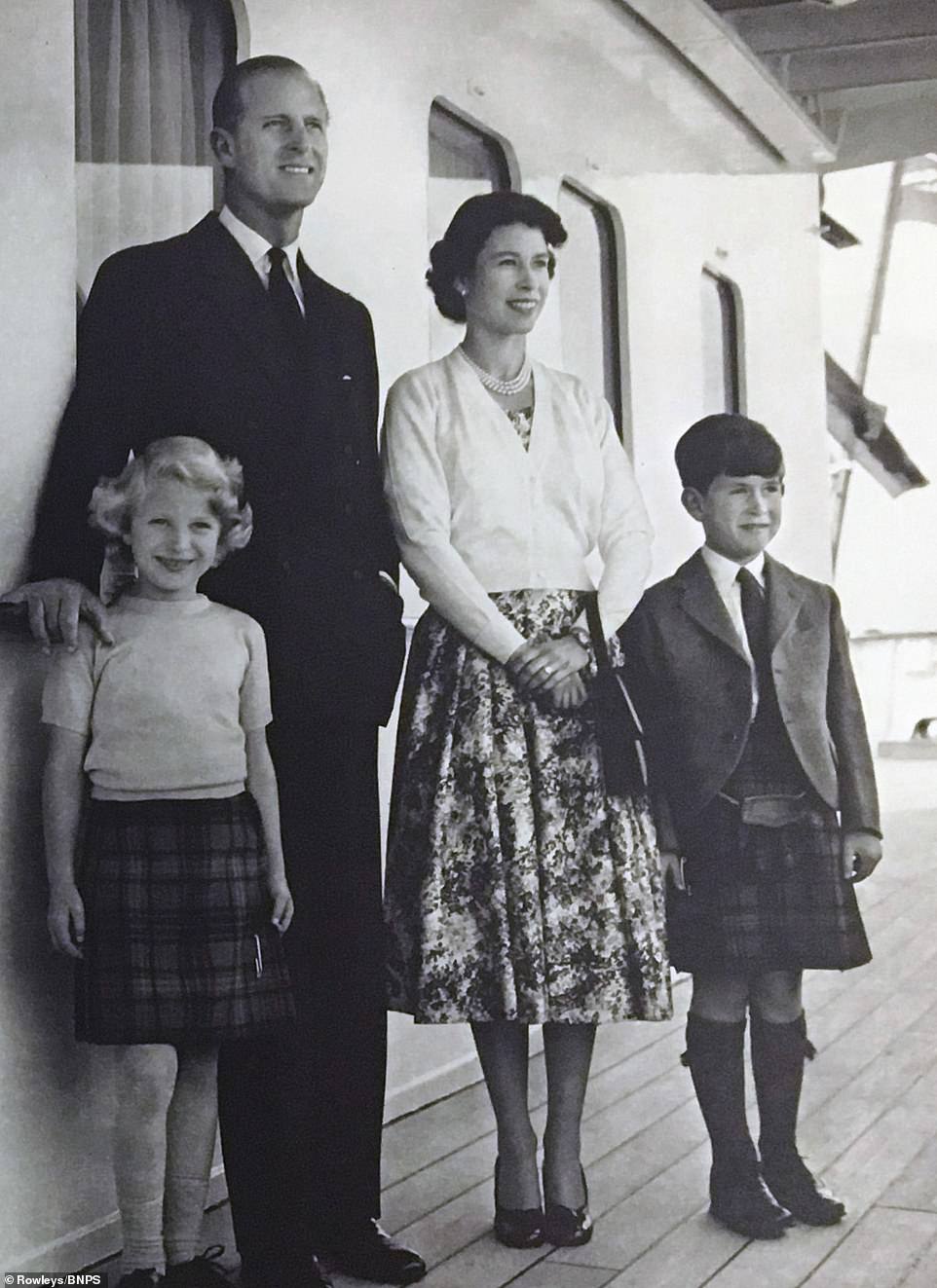 1956: The royal family posing happily on royal yacht, the Britannia. On Christmas Day in 1956, The Duke of Edinburgh was away from home on a voyage around the Commonwealth on the Britannia. Prince Philip spoke on the radio from the Royal yacht before The Queen made her Christmas broadcast live from her study in Sandringham, Norfolk 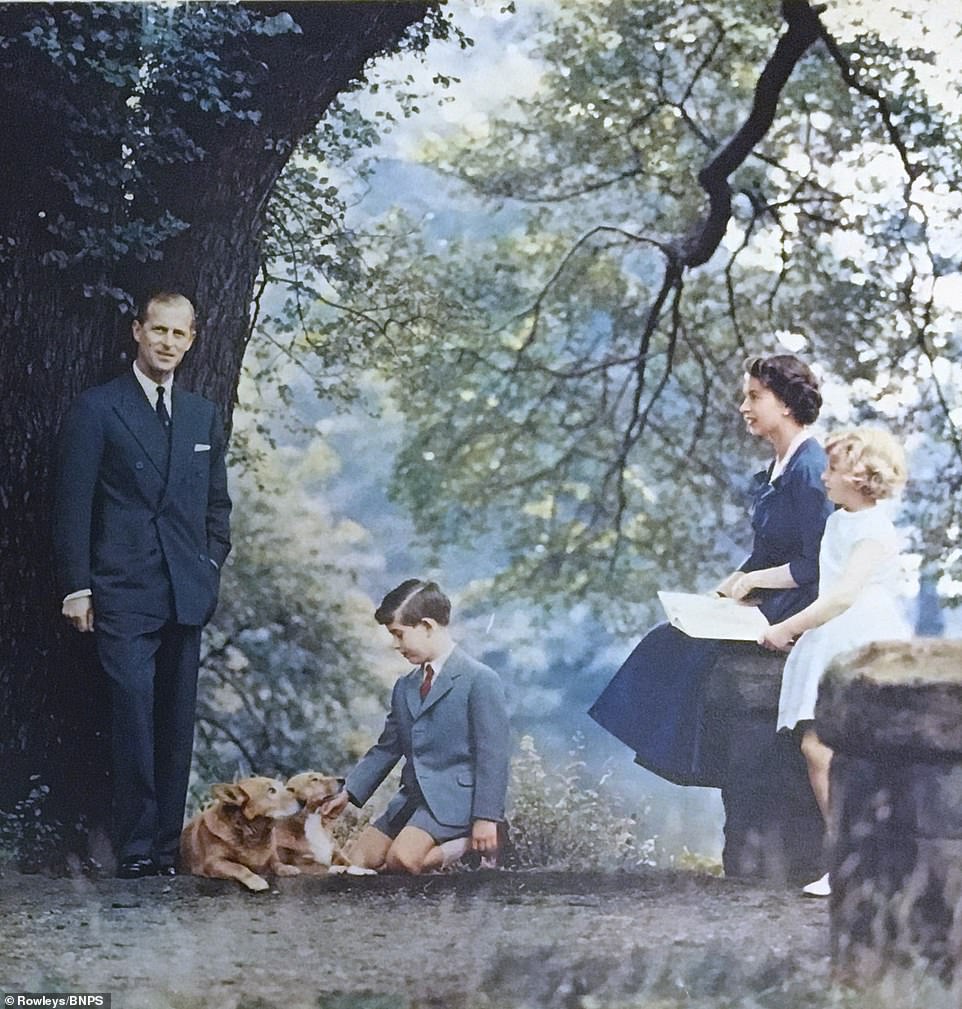 1957: The first Christmas card to be in colour, it shows the royal family outdoors, enjoying the sunshine. A young Prince Charles is pictured playing with the Queen’s beloved dogs. They seem to be Dorgis, a mix between her famous Welsh Pembroke Corgis and a Dachshund. The Queen’s 1957 Christmas Broadcast was an historic event, as it was the first to be televised. It was also the 25th anniversary of the first Christmas Broadcast on the radio

1958: Instead of a photo of the royal family, they shared a religious art scene in the 1958 Christmas card. The Holy Family with Saint Elizabeth, Saint John the Baptist and an Angel, painted by Sebastiano Ricci was the painting included. This biblical scene is most likely to be the ‘Return from Egypt’, when according to legend, the meeting of the Holy Family with St. John the Baptist took place. It was acquired by George III in 1762 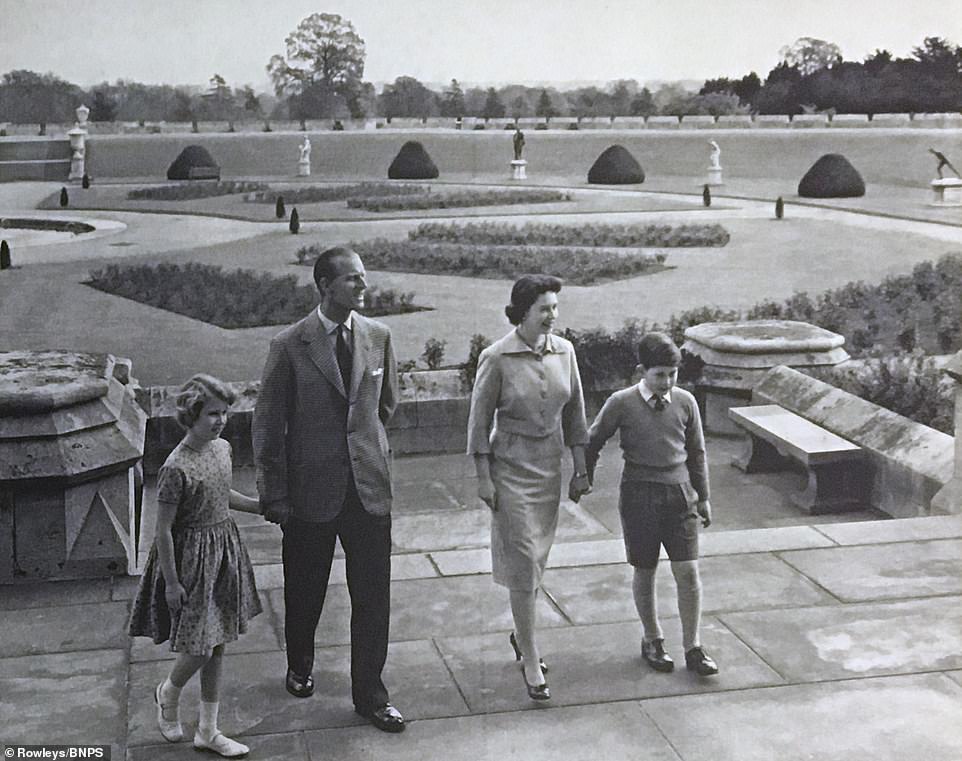 1959: Despite switching to colour in previous years, the black and white made a return in 1959, with the Christmas card depicting Charles and Anne with the Queen and Prince Philip. The Queen’s Christmas Broadcast in 1959 took the form of a prerecorded radio message instead of a television broadcast. The Queen was pregnant with her third child, Prince Andrew, at the time, who was born the following February 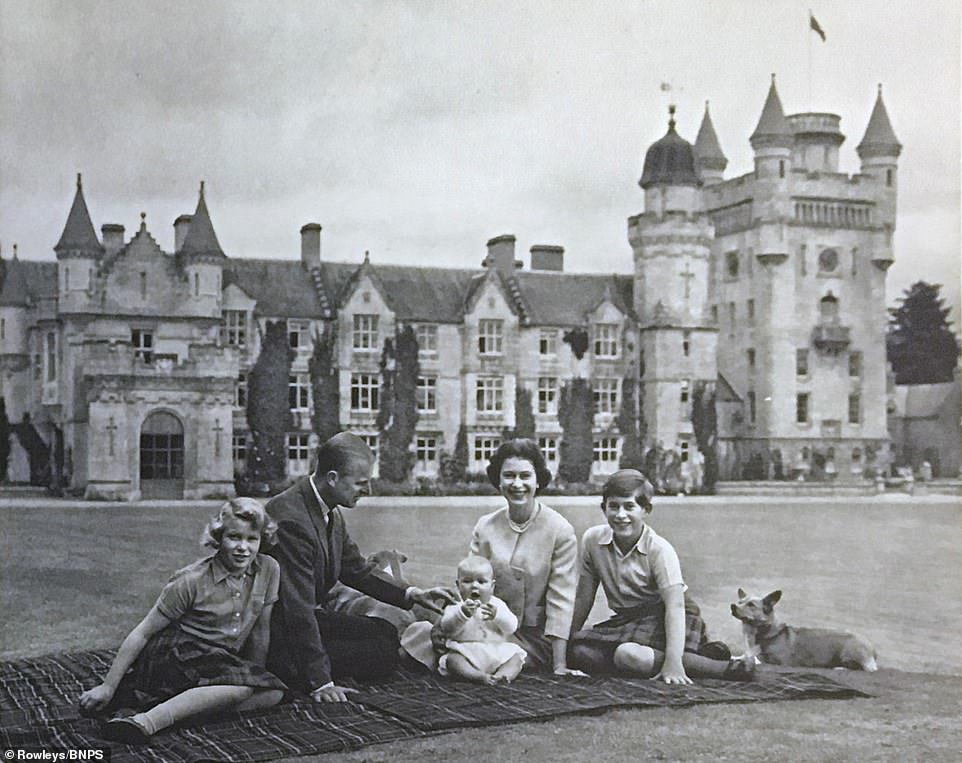 1960: In this Christmas card, Prince Andrew makes his first appearance, with one of the Queen’s beloved Corgis also being included. In her Christmas Broadcast of 1960, he Queen spoke from Buckingham Palace, and described an eventful year. The Queen gave birth to her third son, Prince Andrew, in February; Princess Margaret married Anthony Armstrong-Jones in May; and Nigeria gained its independence while remaining part of the Commonwealth. She also talked about an earthquake in Morocco which killed 12,000 people; the deaths of 69 protesters in a massacre in Sharpeville, South Africa; and an explosion in a Welsh pit in Monmouthshire which killed 45 miners

1961: This year saw another painting of the Holy Family used instead of the royals. This one was painted by Sir Peter Paul Reubens. This scene shows the Christ Child standing on the lap of the Virgin, who sits with her mother, St Anne, and husband, St Joseph, behind. It’s unclear when it was bought, but it was probably obtained by George I in 1723 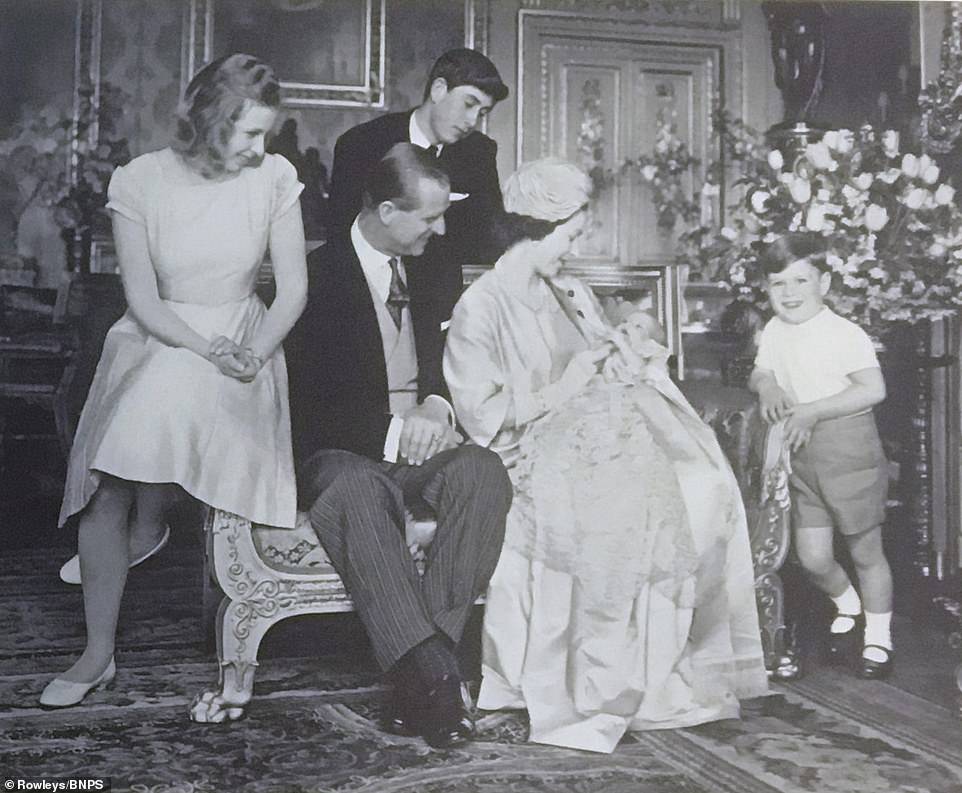 1964: Prince Edward makes his first appearance. Prince Edwards was the Queen and Prince Philip’s last child. The Queen’s Christmas Broadcast in 1964 addressed the important role of the Commonwealth in a year in which anti-apartheid leader Nelson Mandela was jailed in South Africa, and Indian Prime Minister Jawaharlal Nehru died

The following year they bizarrely included a speedboat in the family photo, with all six of them roaring with laughter.

In 1970 they sent a photo of the Royal Yacht Britannia in Sydney Harbour, a nod to a Royal tour of Australia that year to mark the bi-centenary anniversary of James Cook’s first voyage Down Under.

In 1971 and 1972 they included family photos with all the members in high spirits.

The photos are being sold at Rowley’s auction house in Ely, Cambridgeshire, with estimates of between £100 and £150 per card. 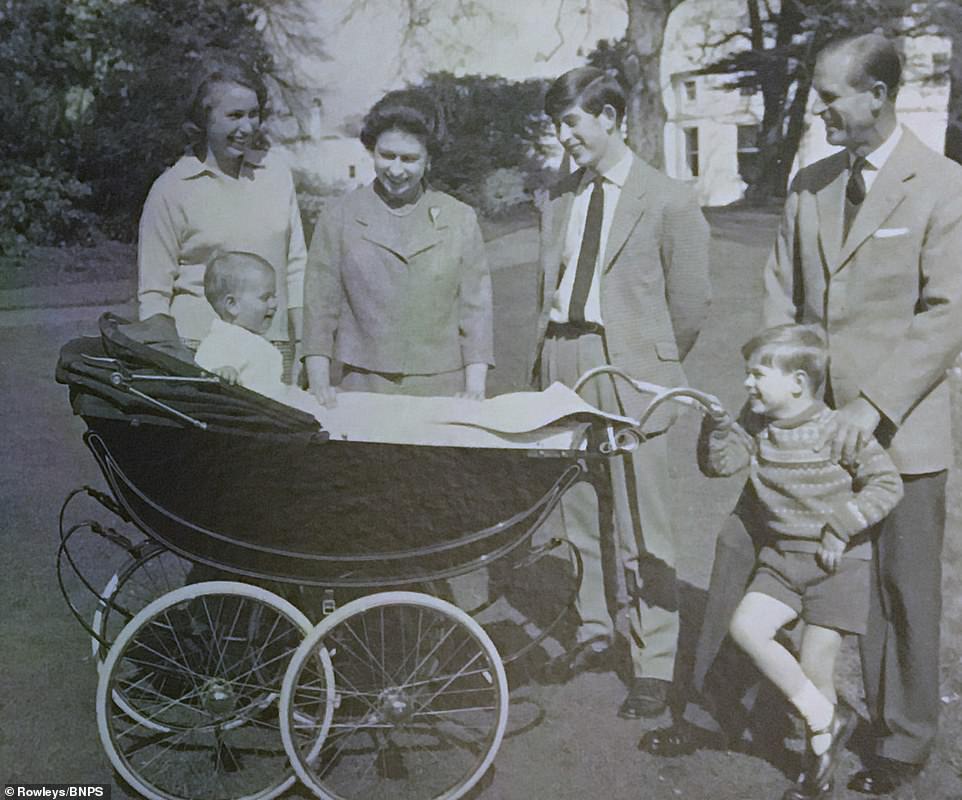 1965: The family look in high spirits in this photo, with Prince Edward in the pram and an excited Prince Andrew playing with him. The photo is a poignant one with the Queen focusing on the importance of family in 1965. The Queen’s Christmas Broadcast in 1965 took as its theme the family, from the individual unit to the family of man. It was broadcast from Buckingham Palace 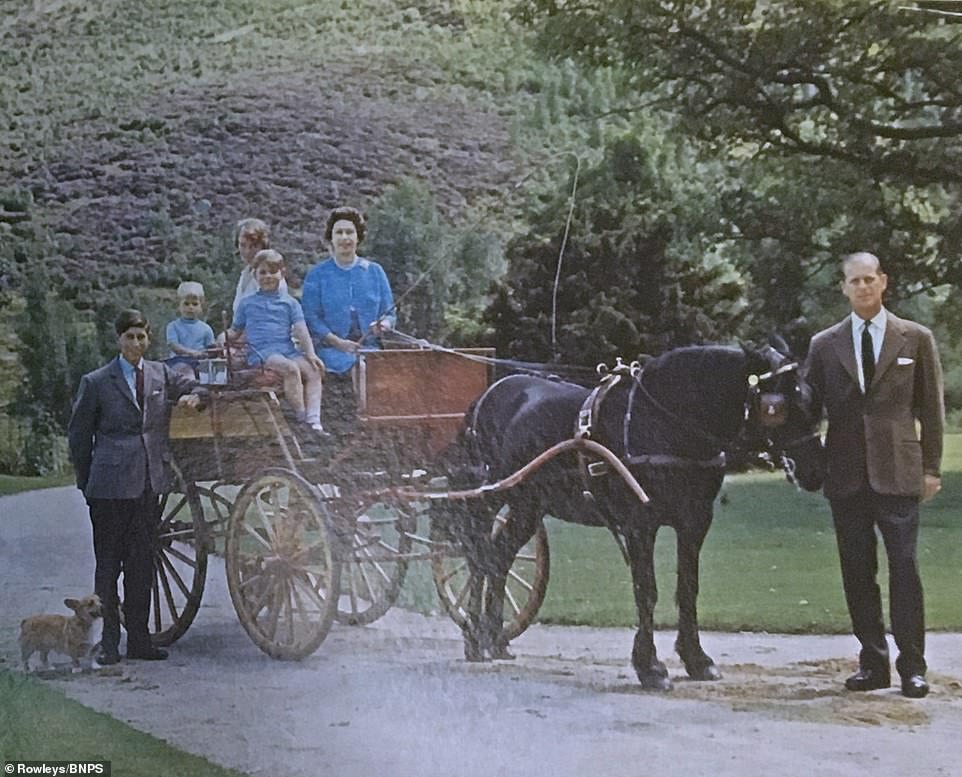 1966: Colour finally returns to the family photo this year – as does the Queen’s beloved Corgi. This was also the year that women’s issues came to the forefront and the Queen, in her Christmas Broadcast of 1966, in a decade which saw great changes for women, spoke about the increasingly prominent and important role played by women in society. The contraceptive pill was launched in 1961 and abortion would be legalised in the UK, for women who were up to 24 weeks pregnant, in 1967 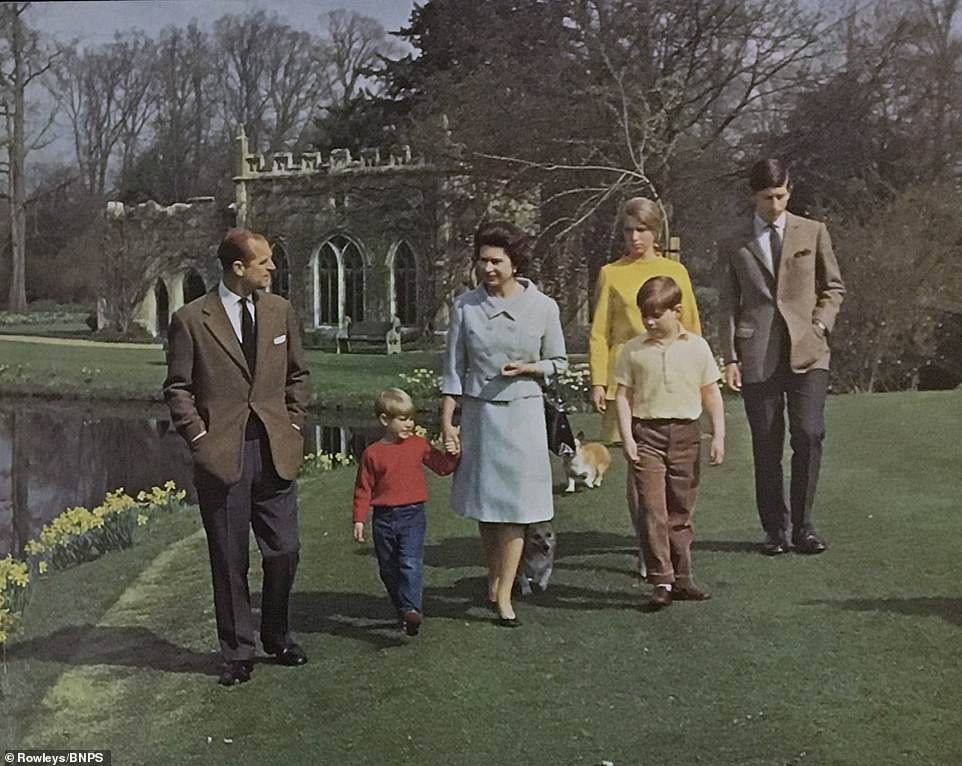 1968: The young family together, with Corgi in tow, in a spring photo that was used for that year’s Christmas card. The Queen’s Christmas Broadcast for 1968 – the year in which civil rights leader Martin Luther King was shot dead in Memphis – took the theme of brotherhood. It was filmed in Buckingham Palace. It was a dramatic year for the Queen, with a book claiming she had to talk relative Lord Mountbatten out of leading a plot to overthrow a Labour government in 1968. Lord Mountbatten, Prince Charles’ great uncle and mentor, came close to leading a group of industrialists, generals and tycoons in the coup to replace then Prime Minister Harold Wilson 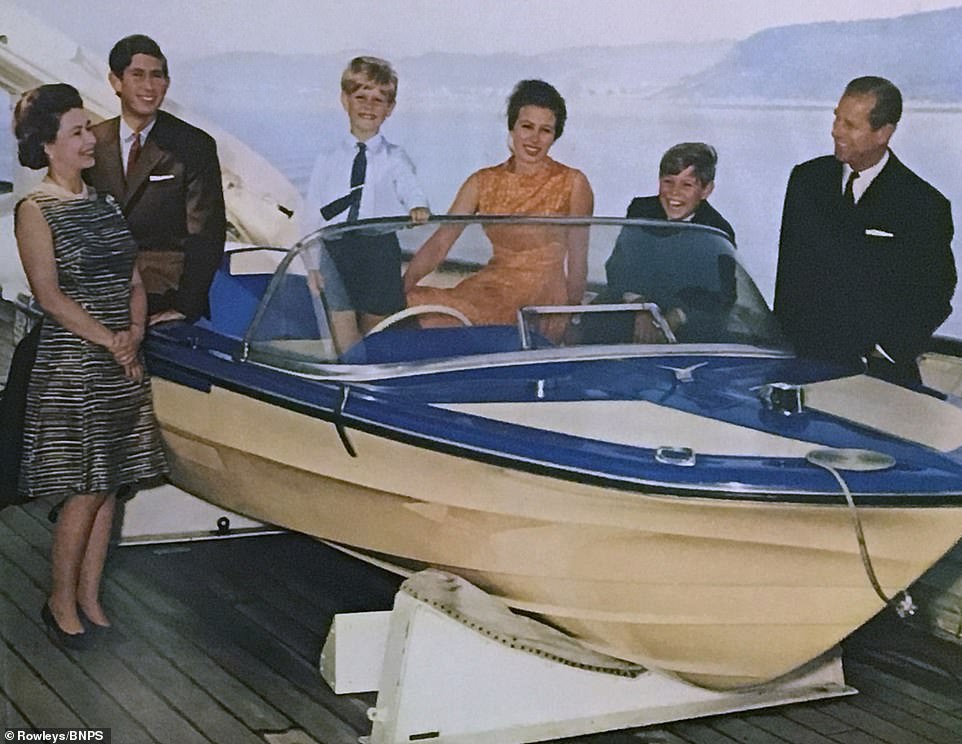 1969: The family are enjoying a speedboat on board the HMY Britannia. For the only time in The Queen’s reign to date, there was no televised Christmas Broadcast in 1969.  This was because a special documentary film – ‘Royal Family’ – had been made during the summer in connection with the Investiture of The Prince of Wales. It was therefore decided not to do a broadcast at Christmas, but The Queen issued a written message instead. In 1968, the Queen allowed cameras to follow the family for the ground-breaking BBC television documentary, Royal Family, a two-hour special that was watched by 40 million people around the world when it aired in 1969. However, the Queen has never allowed it to be shown since

1970: No photo of the family, instead the Christmas card showed HMY Britannia leaving Sydney harbour in Australia. This year, the televised Christmas Broadcast made a return. 1970 marked the 200th anniversary of the voyage of Captain Cook ‘discovering’ Australia. The Queen’s Christmas Broadcast that year recounted some of the trips made by The Queen earlier in the year. It included film shot in Australia, New Zealand and Canada 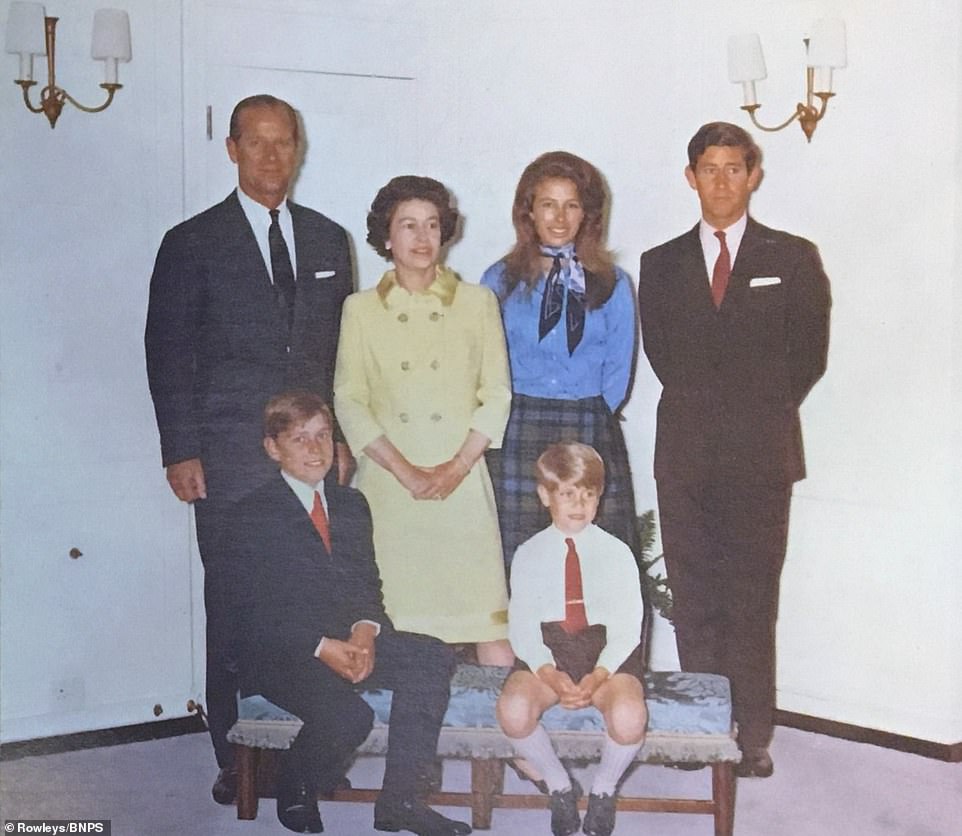 1971: A colour photo of the royal family. The Queen’s Christmas Broadcast in 1971 focused on the theme of families. The television version showed Prince Andrew and Prince Edward looking at a family photograph album 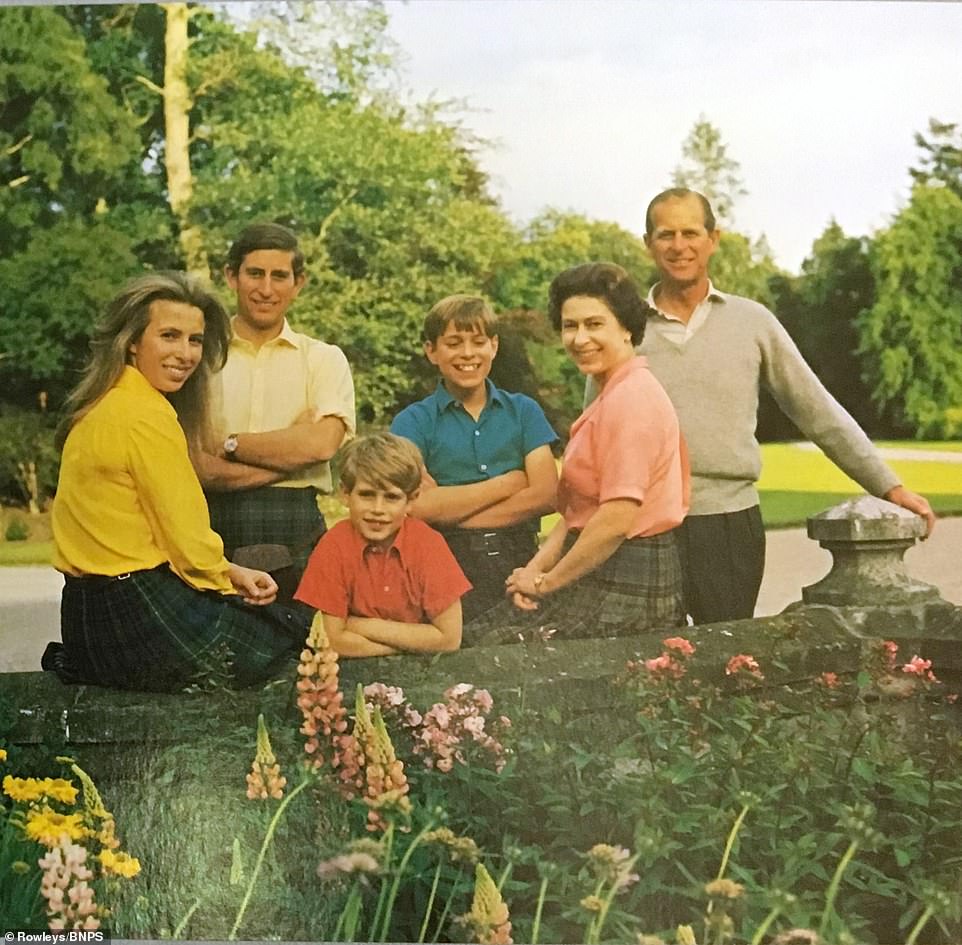 1972: The final card in the collection, this colourful photograph shows the entire family enjoying themselves outside. They look happy and relaxed in the photo, which was sent out in the Christmas card. A momentous year, the Queen and Prince Philip celebrated 25 years of marriage, and the Queen’s Christmas Broadcast that year included scenes from the celebration. The year also saw terrible violence in Northern Ireland, and preparations for Britain to join the European Economic Community. The Queen refers to both these news stories in her speech