JAN MOIR: Milking their connections for all they’re worth, the lesser royals always want more

Raising a glass of Chinese brand, bottled Jersey milk to the camera, the Queen’s grandson Peter Phillips claims: ‘This is what I drink.’

Is it really? Come off it, Pete, mate. This is what you drink when an advertising agency pays you to do so. We all know it and so do you.

Shortly after Princess Anne’s son was embarrassingly revealed to be cashing in on his royal status by advertising milk in China, Lady Kitty Spencer — Princess Diana’s niece — was also found to be exploiting her royal connections by promoting a rival brand.

In her Chinese milk ad, Kitty was photographed posing alongside a cake stand, and pretending to be interested in an exhibition at the British Museum.

Shortly after Princess Anne’s son was embarrassingly revealed to be cashing in on his royal status by advertising milk in China, Lady Kitty Spencer — Princess Diana’s niece — was also found to be exploiting her royal connections by promoting a rival brand

Honestly. The financial escapades of the minor royals would make a heritage tomato blush.

One could just die from the full-cream cringe as these no-talent offspring and hangers-on do their best to milk their connections, no matter how distant.

The sorry truth is that the lesser royals always want more — and history proves that it hardly ever ends well.

Peter Phillips has no title and is to be commended for earning an independent living as an events manager, but it is always helpful if those shindigs are near to home, isn’t it?

One famous jamboree he organised was the street party in The Mall to celebrate the Queen’s 90th birthday. Tickets were £150 each, but that sum did include half an egg sandwich and a kiss-me-quick hat.

‘It’s not exactly a cheap exercise. Fortunately our corporate partners have provided the funding for the majority of the costs,’ he huffed, when the price of tickets was criticised.

Yet Peter is not the only cash-strapped royal to look to the Orient for a pot of gold. It was revealed last year that Hong Kong businessman Dr Johnny Hon gives Peter’s sister Zara Tindall a £100,000 stipend to advise him on horse-racing.

He’s also given almost £300,000 to the Duchess of York for ‘marketing and promotion’ activities, and for being a non-executive director of his film company.

All he seems to ask in return is plenty of hand-shaking access to the royals at corporate and horse-racing events, so that’s all above board, isn’t it? Isn’t it?

Perhaps it is, but there is an uncomfortable feeling of royal opportunism in the air, and there’s no sign of it evaporating any time soon. 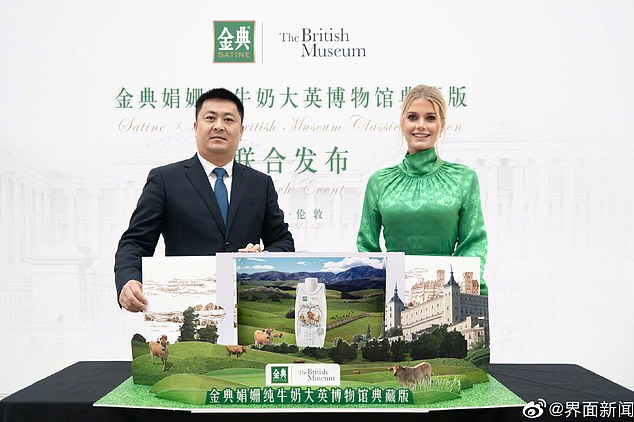 In her Chinese milk ad, Kitty was photographed posing alongside a cake stand, and pretending to be interested in an exhibition at the British Museum

You know exactly what I am talking about.

After being caught hustling for work with Disney on the red carpet recently, the prospect of the Duke and Duchess of Sussex vying for exciting new deals to fund their independent lives is a troubling one.

Not only that, but their new venture shines a light on the commercial activities of other royals, past and present — and makes me worry for the future.

For the marriage between royals and commerce is almost never a happy one.

This is primarily because it is all about ambassadorships and sponsorships, consultancies and endorsements — endeavours that trade off who the royals are, not what they can actually do, which is very little in the first place.

Zara Tindall, like many royals, is an ambassador for Range Rover. This seems to amount to little more than being given expensive free cars to drive around in.

What will happen to this lucrative arrangement now she has just been given a six-month ban for speeding?

Prince Edward’s Ardent Productions — another disaster. For nine years the television company did little except make mediocre royal documentaries that turned up nothing new — despite the excellent access. 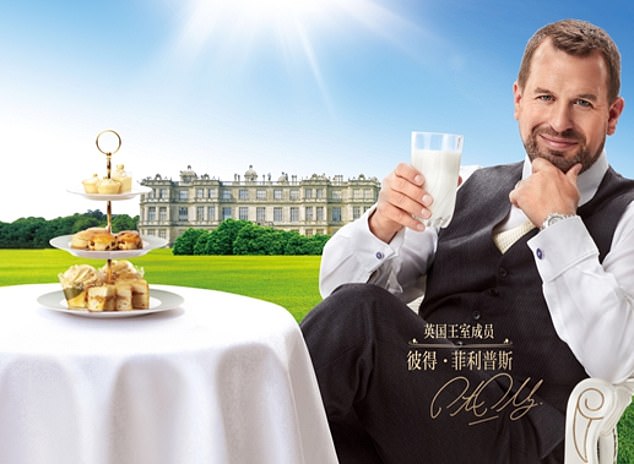 Raising a glass of Chinese brand, bottled Jersey milk to the camera, the Queen’s grandson Peter Phillips claims: ‘This is what I drink.’

Then Edward was censured for sending a crew to film Prince William when he was a student at St Andrews University, in a gross invasion of his privacy. It gets worse . . .

Who could forget Fergie’s Budgie The Helicopter books and diet teas, not to mention the fact that she tried to sell access to her former husband Prince Andrew in 2010.

Indeed, not one but two royal wives (yes, you Sophie) fell prey to fake sheik shenanigans, while Prince Andrew’s reign as UK trade envoy was marred by his relationships with a raft of unsuitable characters, including a notorious paedophile, a shady Tunisian character and a Libyan gun smuggler.

He is the international dolt’s dolt. There is no situation he cannot blunder into and make worse, including allegedly using an official trip to Kazakhstan to try to sell Sunninghill Park, his former marital home with Fergie.

There has always been a problem with the Royal Family and money. How to get it. How to save it. How to spend it. And most of all, how to keep it, come hell or high interest rates.

The Queen, of course, is hugely rich, with a wealth estimated at around £420 million, while Prince Charles’s Duchy of Cornwall estate is worth around £1.2 billion.

Although not legally obliged to pay tax, they chose to start paying income and capital gains tax in 1992.

Back then, the Queen and the Prince of Wales signed voluntary agreements to subject themselves to taxes just like ordinary people — and not a minute before time.

Even despite the pesky taxes, they are wealthy beyond the wildest dreams of everyone, including their nearest and sometimes not quite so dearest.

With all this money sloshing around, you might hope they would organise themselves a little better so that no minor member felt the need to boost his income by flogging milk in China, but no.

Thank heavens, then, for selfless Princess Michael of Kent, another royal who has just made a commercial. But her appearance in an advert to promote a stem-cell clinic in the Bahamas was done only out of the goodness of her heart.

She paid for her own treatment and was so pleased with how it turned out that she wanted to tell the world.

Oh, how I wish more royals could follow this example of uncharacteristic but nevertheless welcome altruism, ahem. Or follow the example set by European royals, many of whom actually work for a living.

For whatever way you look at it, the grubbing royals on financial manoeuvres is a wholly unedifying sight, a horrible little stain on the fabric of the nation. And I fear the worst is yet to come.

Hats off to Cardiff maths teacher Francis Elive, who has inevitably been called ‘The Maths Whisperer’.

His entire class of 30 achieved A* grades in their GCSE, despite sitting the exam six months early.

What is so impressive is that all of the pupils — naturally of mixed abilities and aptitudes, as in any classroom — did well. Mr Elive said there was no secret to his methods and it was down to hard work.

However, his colleagues say he tells his pupils they have already practised the hardest maths they will ever face, so why be scared of an exam?

He instils the belief they can do it, and the children clearly find it inspirational. A wonderful life lesson for all of us.

The Thomas Markle interview (C5) was sad viewing. No he has not been a perfect father, but on balance it looks like he tried his best.

He is now a 75-year-old with a heart condition and seems to be alone in the world, living in reduced circumstances.

I don’t agree with him that anyone ‘owes’ him anything. Yet how awful that even though Harry and Meghan are now in North America, living in luxury in the same time zone and only a short flight away — they still appear to have no time for him. 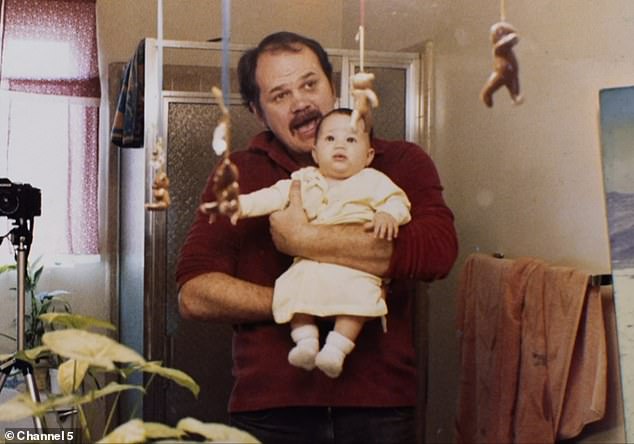 The Thomas Markle interview (C5) was sad viewing. No he has not been a perfect father, but on balance it looks like he tried his best

It remains remarkable that Mr Markle still hasn’t met his daughter’s husband. Their only contact seems to have been an angry transatlantic phone call.

And now it looks unlikely that Mr Markle will ever meet his grandchild — or grandchildren.

He has made mistakes, but it is hard to understand exactly what he has done that is so terrible that it warrants this treatment.

His daughter lived with him throughout her teens, and he paid for her education.

Just three short years ago, she was still proclaiming her daughterly love for him on her Instagram account.

Then along came Harry and everything changed overnight. Having a celebrity marry into a family can unbalance a lot of things; everyone has to recalibrate and adjust.

It seems to me poor Thomas Markle was never given that chance.

Victoria is The One! 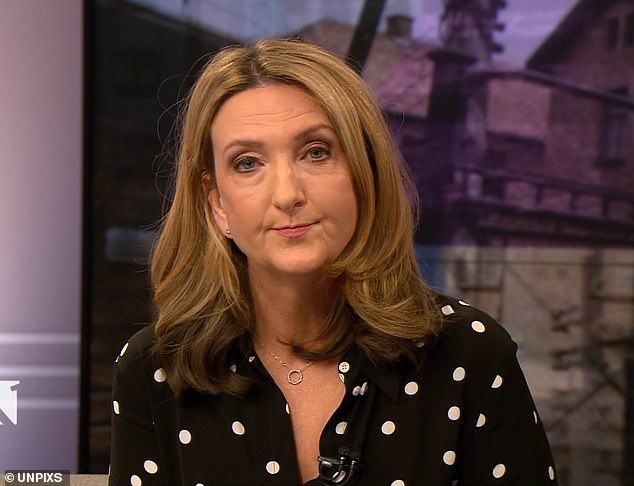 Do us all a favour, drop the moronic The One Show and put Victoria on then instead

One wonders at the BBC axing The Victoria Derbyshire Show — a consistent source of good journalism and interesting interviews. It is also entertaining.

So why not move it to a better time slot instead of throwing it in the bin?

Do us all a favour, drop the moronic The One Show and put Victoria on then instead.

We’re not even through January yet, and Pamela Anderson has gone and got herself another husband.

Last time I met Pammie she was all loved up in the South of France with Adil Rami, the footballer.

‘He cares about me deeply,’ she said. ‘We have a very healthy, simple, wonderful life without all the bells and whistles. He is a good guy, really a good guy.’

But love is fickle — and now she has suddenly married former Hollywood bad boy Jon Peters. 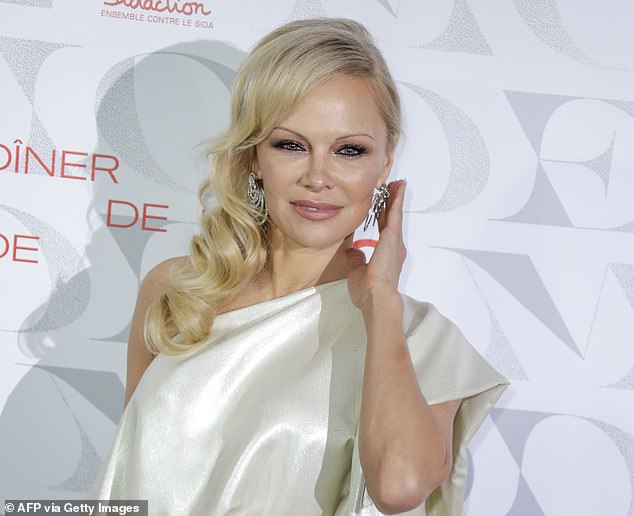 We’re not even through January yet, and Pamela Anderson has gone and got herself another husband

The 52-year-old former Baywatch star began dating 74-year-old film producer Peters after her split from Rami last year. In a lovely romantic coincidence, this is the fifth marriage for both of them.

She and Peters had dated before, some time during the Pleistocene age, after they met in the Playboy Mansion.

‘Pamela has never seen her full potential as an artist,’ said Peters after the Malibu ceremony, which is strange, because everyone else has.

He added: ‘There is much more to her than meets the eye, or I wouldn’t love her so much.’

That’s a little bit creepy, but who wouldn’t wish good luck to a couple who have powered through four spouses each (including a double marriage in Pamela’s case), but still believe in the power of love.