By Caroline Graham In Los Angeles For The Mail On Sunday

The Duchess of Sussex joked that she and Prince Harry attended the premiere of The Lion King in London to ‘pitch’ for work, new footage from the event reveals.

The Mail on Sunday last week unearthed video of Prince Harry touting his wife’s voiceover skills to Disney boss Bob Iger at the event in July.

It came just months before Meghan was hired by the entertainment giant to work on a Disney project in exchange for a donation to the charity Elephants Without Borders.

The Duchess of Sussex joked that she and Prince Harry attended the premiere of The Lion King in London to ‘pitch’ for work, new footage from the event reveals

Now new footage has been found which shows the couple talking to the film’s director Jon Favreau, star Beyoncé and her rap star husband Jay-Z, and Harry, 35, again praising his wife’s acting abilities.

He tells Mr Favreau: ‘If anyone needs any extra voiceover work…’ before Meghan interrupts and jokes: ‘That’s really why we’re here – it’s the pitch!’

Harry then says ‘… just not Scar’ – a reference to the evil uncle in The Lion King who tries to steal the kingdom from Simba. 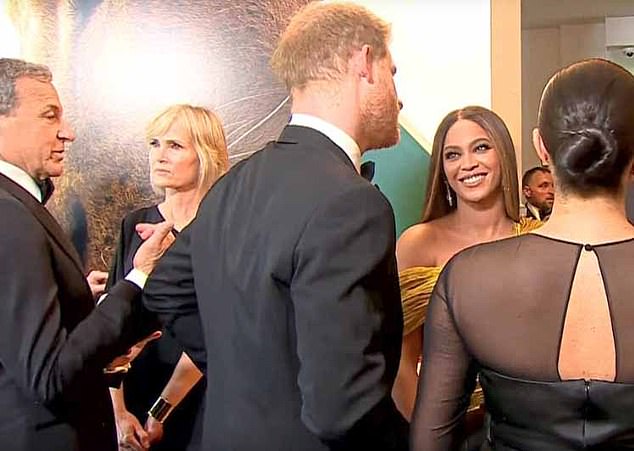 The footage may raise further questions about the point at which the couple decided to step down from their roles as senior Royals and whether they were already considering alternative work last summer.

Ms Bay appears to ask her husband what he and Harry had been discussing, moments after the Prince told Iger: ‘You know she does voiceovers?’

A surprised Iger responds: ‘Oh really? I did not know that.’

While Ms Bay’s comments are unclear, she appears to ask her husband about the conversation moments after Prince Harry moves on. 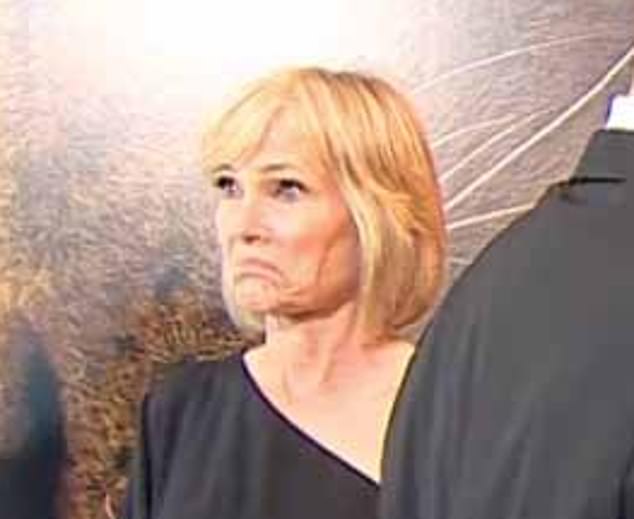 Mr Iger, 68, gestures towards the Prince and appears to fill his wife (pictured) in on their exchange, which results in his wife pulling a surprised face

Mr Iger, 68, gestures towards the Prince and appears to fill his wife in on their exchange, which results in his wife pulling a surprised face.

The Mail on Sunday’s story last weekend was picked up by news outlets around the world, with Canadian author and commentator Mark Steyn calling it ‘the lowest point’ in Royal history since the abdication of Edward VIII.

‘I think of all the pathetic things that the Duke of Windsor did after he abdicated when he entertained wealthy Americans and gave them a sort of pseudo glimpse into Royal life.

‘That’s nothing like actually touting your wife as available for Lion King 7 or whatever it is.’

But many fans praised Harry for supporting Meghan, including Buzzfeed journalist Marissa G. Muller who wrote: ‘His love for her is undeniable… (he) is as supportive as partners come.’

Meghan has retained her Hollywood team of agents and publicists and is reportedly already in discussions about future showbusiness projects.

Prince Harry has signed a deal for a six-part series on Apple TV+ which he is producing with Oprah Winfrey and which focuses on mental health.