Treasure Hunt winner has a right royal reward as Beefeaters present her with £10,000 prize

First Mail Treasure Hunt winner has a right royal reward as Beefeaters present her with £10,000 prize

By Miles Dilworth For The Daily Mail

Anne Noakes was enjoying what she thought was an ordinary Saturday morning, pottering about doing odd jobs at home.

Then she received the phone call that told her she had won the first £10,000 prize in the Daily Mail’s £50,000 Royal Treasure Hunt.

‘It was such a big surprise,’ she said. ‘I haven’t really got my mind around it yet.’

The 79-year-old has been solving puzzles in the paper for years and her persistence finally paid off at the weekend after she cracked the clues to reveal last week’s answer.

Mrs Noakes solved the six riddles in last week’s papers and unscrambled an anagram to reveal the answer associated with the reign of Elizabeth I, which turned out to be ‘Golden Hind’.

The pensioner, from Cobham, Surrey, said she almost thought it was a ‘wind up’ when she got the call to tell her she’d won. She chose to receive cash rather than jewels.

‘You enter these competitions with the idea of maybe winning, but you never expect to be the one!’ she said.

She said she plans to invest the money, but may have a treat or two in store for her three sons and five grandchildren.

‘My middle son is away in America at the moment but when he gets back we’ll definitely go out for a few nice meals,’ she said.

‘I’ve told my close family. They couldn’t believe it. They were quite impressed with Gran winning something. I might need to replenish the wine cellar soon!’

Launched last week, our Royal Treasure Hunt is running for three weeks, with a total of £50,000 up for grabs.

The second part of the Royal Treasure Hunt – this week, all the answers relate to Queen Victoria – started in Saturday’s Weekend magazine and today’s teaser is printed below.

So sharpen your pencils and see if you can solve it! 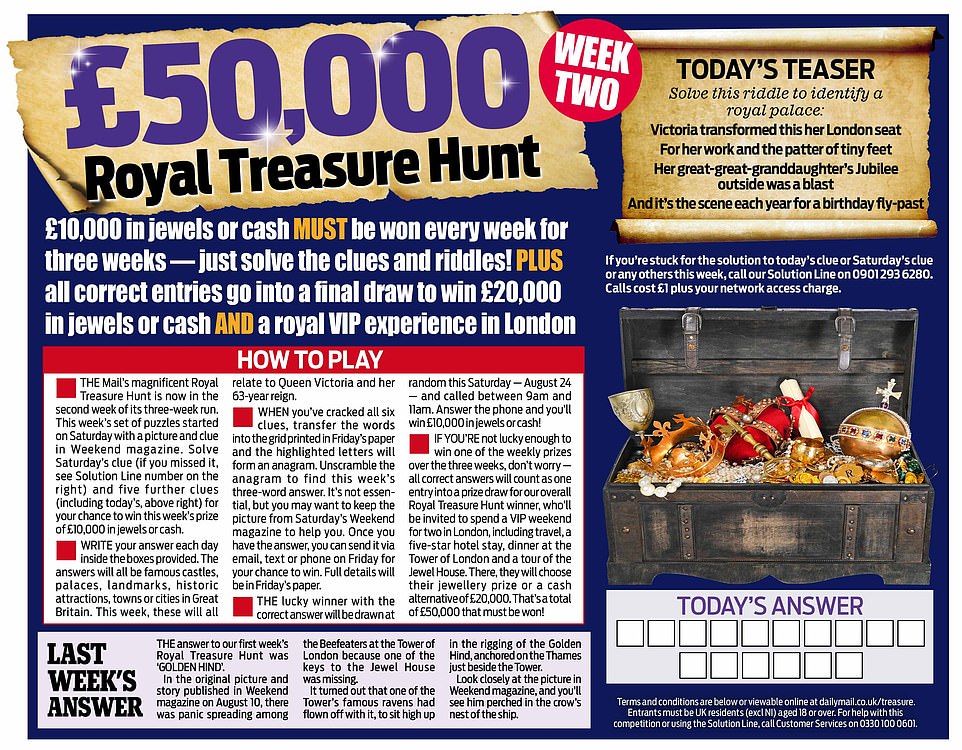