Who the hardest working royal REALLY is

While most people might have spent Boxing Day walking off their Christmas lunch or snoozing through a film, Tim O’Donovan was settling down to do some serious arithmetic, as he always does at this time of year.

And there can be no margin of error when your annual sums make headline news — as they do today.

For Mr O’Donovan, 87, is the man who works out precisely what the Royal Family have been up to over the past 12 months and has done so for four decades. 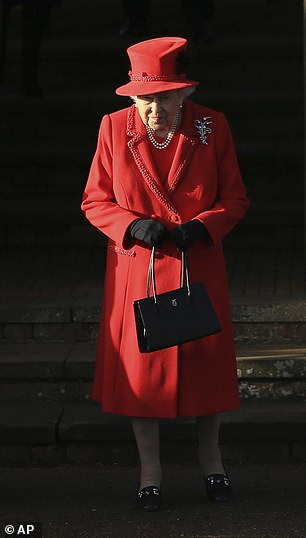 The Prince of Wales (left) has attended more than 500 engagements this year. Our indefatigable 93-year-old Queen (right) is on nearly 300

His 2019 figures show that the Prince of Wales has been the busiest member of the family with 521 engagements, just ahead of the ever-active Princess Royal on 506.

Our indefatigable 93-year-old Queen, on nearly 300, remains ahead of the younger generation such as the Duke and Duchess of Cambridge (220 and 126 respectively), though, unlike them, the Monarch has not been abroad.

Mr O’Donovan uses the Court Circular — the official daily list of royal engagements — to compile a tally of every single duty undertaken by each member of the family, be it the Queen opening Parliament or the Duchess of Gloucester at an exhibition of basket-weaving.

The Queen, on nearly 300, remains ahead of the younger generation such as the Duke and Duchess of Cambridge (220 and 126 respectively), though, unlike them, the Monarch has not been abroad

He notes them all down, producing a quarterly total as he goes. Come the year end, Mr O’Donovan produces an annual table of results, which he then sends to the editor of The Times.

Some engagements might involve little more than turning up; others demand much preparation, not to mention a long journey. And the Court Circular makes no mention of illness, pregnancy, red boxes or the paperwork and private meetings which fill every royal diary.

‘It’s not a competition. I just think it’s important for people to know how much the Royal Family do,’ Mr O’Donovan explains.

Any talk of ‘slimming down’ the Royal Family completely overlooks so much unsung work, he says, but adds: ‘I wouldn’t make it any bigger.’

No one ever asked him to do this. His family, he admits, think he is ‘a bit nutty’. Indeed, an emissary from the Royal Household once asked him not to do it at all.

Nor does Mr O’Donovan receive any sort of reward. He does it because he ‘finds it fascinating’ and because he is an ardent supporter of the monarchy.

And since this is his 40th year of drawing up these lists, I’ve come to see him at his Berkshire home in Datchet, just across the river from Windsor Castle.

As he sits at his busy desk, beneath royal photographs and shelves of memorabilia, the first thing which strikes me is that Tim O’Donovan is a rare monument to the amateur spirit in the age of the professional bean-counter.

Everything has a watchdog these days — Ofsted for schools, Ofcom for communications and so on. But the monarchy? Its annual output is chronicled by a retired insurance broker who does it for nothing, armed with a pen, paper and a pile of newspaper cuttings.

The Duchess of Cambridge (pictured) has attended 126 engagements this year

‘You can’t leave it to a computer,’ he says. He is so thorough that his statistics will be quoted verbatim from here to Tasmania. On the one occasion when the Palace actually audited his figures, they found he was spot on.

Mr O’Donovan says he came up with the idea in 1978 after seeing a letter in a newspaper from someone who had added up all the names in all the birth announcements that year in order to compile a list of the most popular ones.

‘The thought just occurred to me that it might be worthwhile to do the same with royal engagements,’ he says.

So, as 1979 dawned, he began cutting out the Court Circular each day, pasting each clipping in a scrapbook.

He would keep a running total for each family member, breaking engagements down into official visits, receptions or lunches, meetings, audiences and overseas tours (but not including routine events like Sunday church).

In that first year, he showed that the Queen and Prince Philip had undertaken the most engagements (325 and 242 respectively).

Other members of the family were busy, too, with the Queen Mother clocking up 118 engagements.

‘What value for money the country gets from our head of state and her family,’ Mr O’Donovan wrote in his accompanying letter.

He shows me his inaugural scrapbook — actually a rather smart, red, embossed hardback register — and I look up the very first royal engagement of the tens of thousands he has studied.

It is for January 9, 1979, when the Duke of Gloucester attended the annual Business and Industry Awards for the Environment. The final entry for the year was the memorial service for Earl Mountbatten. 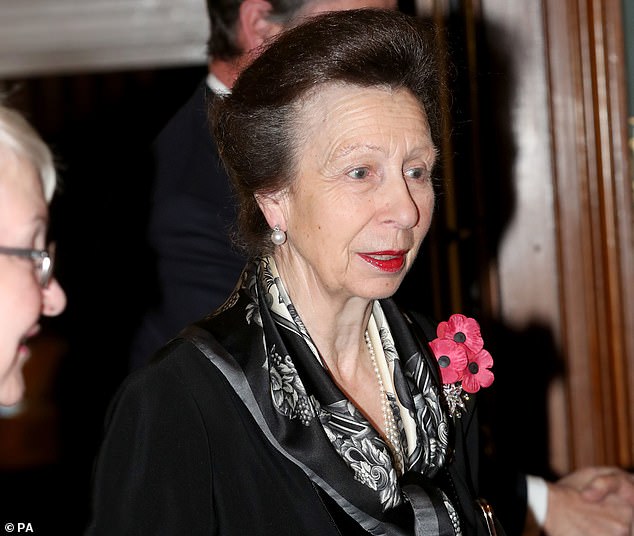 Princess Anne (pictured) is near the top of the list too, having attended more than 500 engagements this year

‘I was there and the Prince of Wales made a really excellent address,’ Mr O’Donovan recalls. Over the years, he has met many members of the Royal Family, though none has ever discussed his book-keeping directly.

Each year thereafter, royal correspondents would eagerly await his results, along with the New Year honours. By 1983, his figures were being reproduced in the foreign media.

In time, his analysis began to show new front-runners coming through. ‘A Busy Year For Princess Anne,’ the Mail reported in 1984, as the Princess claimed top spot.

If the press and public enjoyed his findings, the Palace was less appreciative. The Royal Household has never published any such figures, on the basis that royal duty is not a competition.

In 1982, Mr O’Donovan received a ‘friendly’ letter from the Queen’s press secretary, noting that his figures had been taken out of context by some papers.

Mr O’Donovan, for his part, argued that the Court Circular was misleading because it omitted most individual overseas engagements. Buckingham Palace duly agreed to include them in the Circular, too. Hey presto, the overall number of royal engagements suddenly went up.

George V would have approved of Mr O’Donovan (whom he met as a three-day-old old baby during a royal visit to the hospital where Mr O’Donovan was born in 1932). The King used to ask his friend, the Rev Robert Hyde, to compile annual charts of royal engagements which would be delivered to Sandringham each Christmas.

Even so, there were those within the Palace who wished that Mr O’Donovan would find himself another hobby. He recalls a drinks party in the late Eighties and a chat with the then Dean of Windsor, Michael Mann. 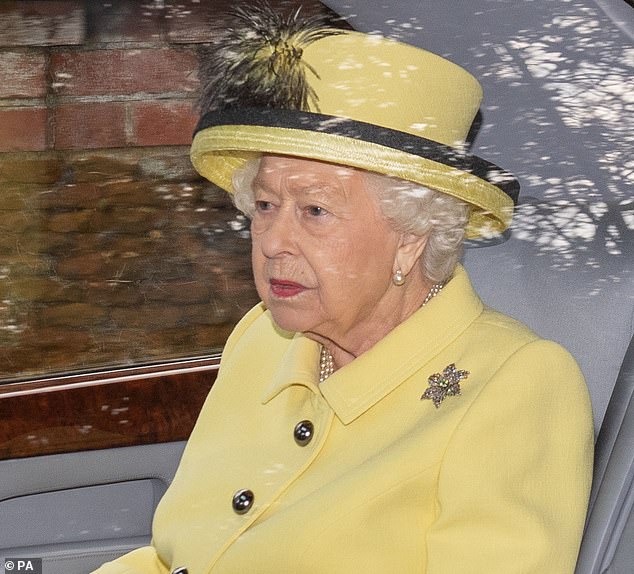 If the press and public enjoyed his findings, the Palace was less appreciative. The Royal Household has never published any such figures, on the basis that royal duty is not a competition. Pictured: The Queen leaves church this morning

‘He was an absolutely delightful man and an excellent dean. But he had been asked to have a word and said, “The Palace don’t want you to carry on doing this.” ’

‘I persuaded them of the value of what I was doing and that I should carry on doing it,’ he says. And so he did. Years later, he would receive a letter from Lord Fellowes describing him as ‘a true friend of this institution’. Indeed, in honour of his 40th year of number-crunching, Mr O’Donovan was invited to a Buckingham Palace garden party in the summer.

The Royal Family could hardly have a more devoted enthusiast than a man who spent more than 35 years as a Lay Steward at St George’s Chapel, Windsor.

Yet totting up royal fixtures has been just one of umpteen voluntary pursuits.

On finishing school (Marlborough) and National Service, Mr O’Donovan worked in insurance. He helped rally support for a City of London church, ran an environmental awards campaign, wrote a book about industrial disputes and became a stalwart of both the National Art Collections Fund and Macmillan Nurses.

In retirement, he spent a decade as the secretary of the Friends of St George’s Chapel, Windsor, helping to raise hundreds of thousands. His fundraising exhibitions, marking events such as the birthdays of the Duke of Edinburgh or the Queen Mother, were all attended by members of the Royal Family.

And when Mr O’Donovan spotted smoke rising from Windsor Castle in November 1992, he was soon on the scene as the great fire took hold.

‘I was directed to the Queen’s entrance where the carpet was soaking from the fire hoses and covered with gravel. So I joined a chain of people carrying furniture out of the castle.’

He says he has always ‘liked to keep himself busy’. These days, his first priority is his wife, Veronica, now in a care home, while his two sons and his grandson keep an eye on him.

But he still enjoys compiling his charts.

It strikes me as an oversight that someone who has done so much pro bono publico all these years has not been formally recognised. Nor has his name ever appeared in the Court Circular which he, more than anyone, has done so much to promote. Earlier this year, he was profiled by The New York Times, which likened him to previous scholars of Britain’s constitutional traditions such as Walter Bagehot.

Modest and good-humoured, he has no complaints as he prepares to start on his 41st scrapbook. ‘It’s just a hobby,’ he says cheerfully.

‘It hasn’t done the Royal Family any harm. In fact, I think it’s done some of them a lot of good.’